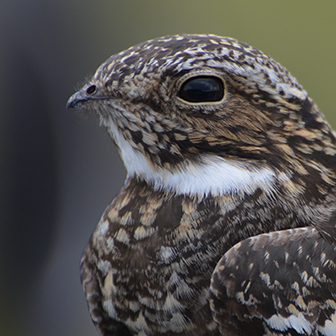 I witnessed an amazing sight last night – thirty nighthawks overhead! They were darting and swooping so high there was no hope of me getting a photograph. However, with the distinguishing white slash on their pointed, swept-back wings, as well as the rounded head with an all-but-invisible beak, they are easy to identify even far overhead. 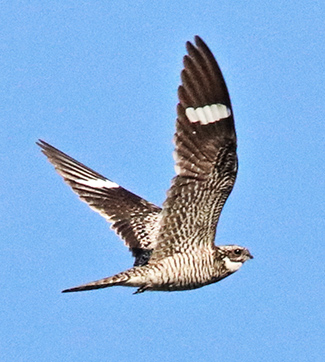 Head out at dusk or in the very early morning to a wetland or a ball field lit by lights, or any other place where insects are plentiful in late summer. If you are lucky, you will see nighthawks swooping and diving for a meal. The first sign of them might be their sharp, electric peent sound as they call to each other.

Nighthawks do not seize their food in their bills, or in their talons as a raptor would. Instead they feed by flying down onto bugs with mouth and throat wide open. The insects go straight down the hatch. For this reason they can be vulnerable if injured, since they can only feed themselves while flying. It also makes them virtually defenseless against predators, so they rely on their exquisite cryptic coloration for protection.

The nighthawk’s feet are among the smallest and weakest relative to its size in the bird world. Interestingly, they often perch parallel to rather than perpendicular to the branch. This may be because it is more comfortable on their small, flat feet, or it may be to enhance the effect of their camouflage. In urban areas they often roost and nest on flat roofs. 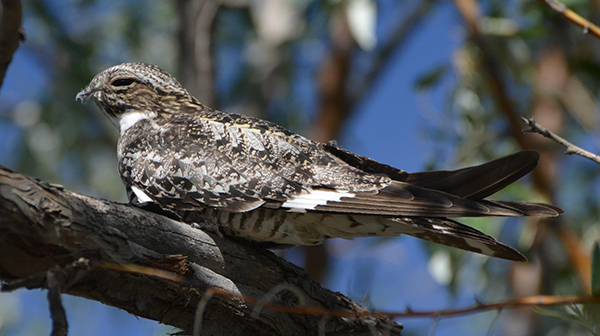 The male nighthawk makes an impressive “booming” sound that is produced by air as it rushes through the primary wing feathers. This is a type of non-vocalization call, much like woodpeckers that make territorial calls by drumming on resonant tree snags. The nighthawk uses this non-vocal call as a part of its courtship ritual.

Once much more common, nighthawks and their relatives have been called “goat-suckers,” apparently because their flexible mouths appear large enough to milk a goat. Although they do no such thing, the name has stuck. They have also been called “bullbats,” because of the roaring sound the males make in their courtship display. Today, bird surveys show a decline in populations of nighthawks, especially on the east coast, so seeing a flock of them is thrilling.

Hear the calls of the nighthawk at allaboutbirds.org.